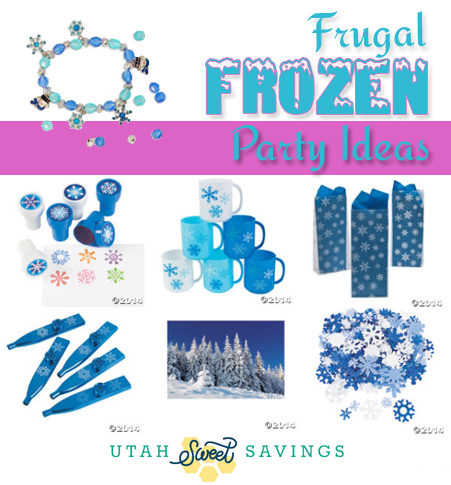 My daughter, like so many other little girls, wanted to celebrate her birthday with a Frozen theme. We just had the party, and it was a huge hit, mostly due to a couple of very special guests from Magical Celebrations (read on for an exclusive deal just for Utah Sweet Savings readers and to watch a video from the party)! Those of you who have been readers for any length of time know that creativity is my weakness, but frugality my strength, so I thought I would share with you how we saved money on her party, while still making it special for her and the 24 other children that she invited!

To set the theme of the party, I used the colors turquoise (from Elsa’s dress) and magenta (from Anna’s cape). I found most of my supplies at Watkins Party Store and Dollar Tree in Logan. Decorations were kept simple, since we were holding the party at a church and would need the take down and clean up to be easy. We used 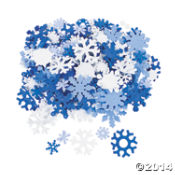 balloons and plastic table coverings which could easily be thrown away. I did splurge and get Frozen themed napkins, but kept the plates and cutlery just a plain old blue.

The “centerpieces” for the tables were white felt scarves (borrowed from a friend) sprinkled with foam snowflake cutouts, which I purchased from OrientalTradingCompany. At $6 for 400 pieces, there was more than enough for 3 guest tables and the main food table. 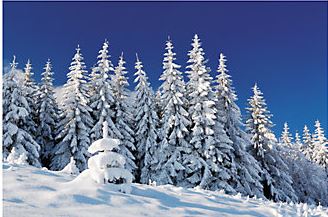 We wanted our surprise guests from Magical Celebrations to have a special place, so we also set up this fun Winter Scene Backdrop, also ordered from OrientalTradingCompany for $16. 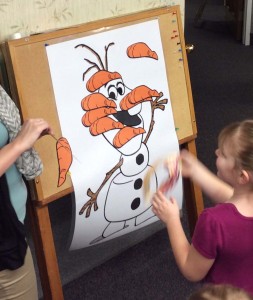 As guests arrived, they got to Pin a Nose on Olaf. Isn’t he cute? My sweet husband made him and the noses for me. The children had SO much fun with this activity. Some kids did it about 5 times! I used a headband for an easy blindfold, so it could easily be slipped on and off, and we didn’t have to tie it onto kids.

After that quick game, they grabbed some of the great FREE Frozen printables that I shared with you before and colored while waiting for everyone to arrive.

Of course, the atmosphere was also set with the fabulous music from the movie. It was fun to hear the kids humming or singing quietly along as they colored.

We also played a game of Frozen Bingo. I found several free versions online, but opted to spend $5 on this set from Etsy since I had such a big group of kids and I wanted them to each have their own card. I also figured my kids would enjoy playing it after the party. 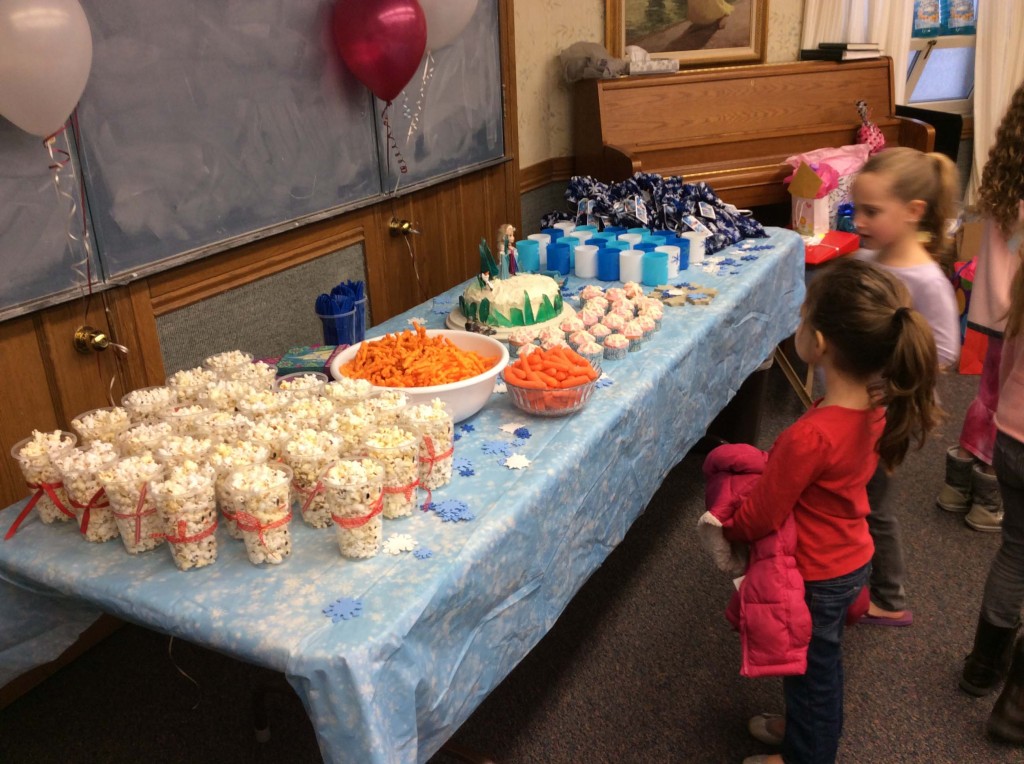 For the refreshments, we had Dominoes deliver pizza (since the party was from 4:30-6:30, I anticipated hungry kids), and also these adorable popcorn snowmen popcorn cups that I found on Pinterest. Kids also munched on Olaf noses (baby carrots and Cheetos), and we used Hawaiian Punch Polar Blast for our beverage of choice. Simple, tasty, and kid friendly. 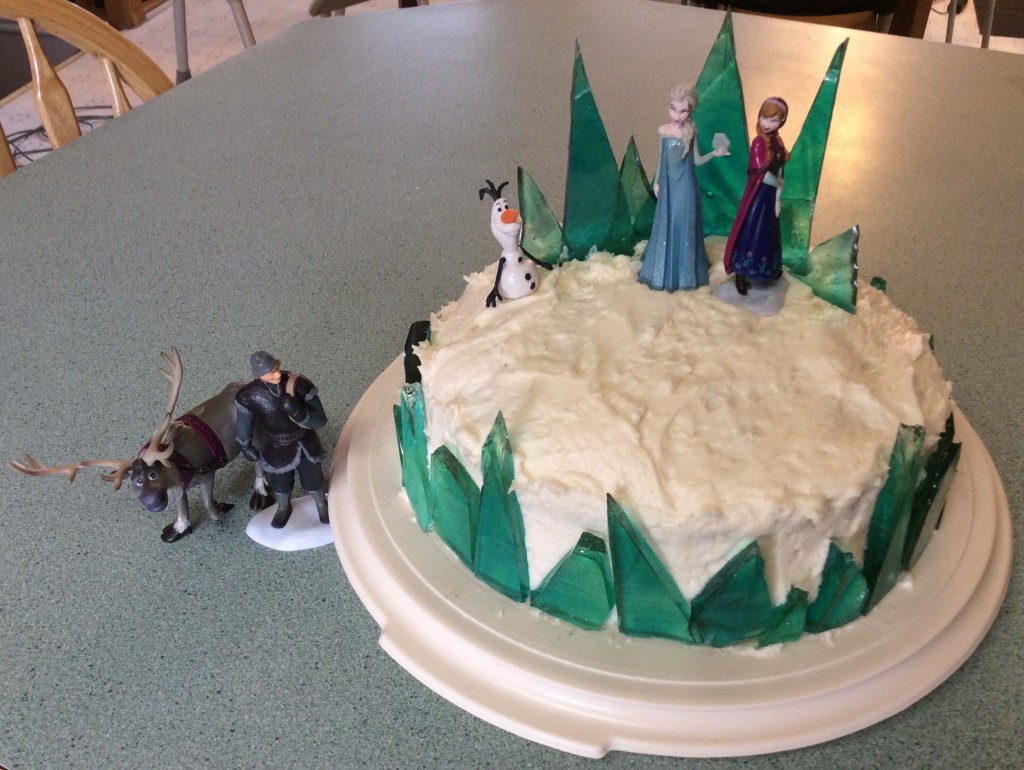 My fabulous husband also decorated the cake, which was made from a Pillsbury Blue Raspberry Cake Mix. We used this creative glass candy idea, also found on Pinterest. Make sure you read the comments in her post about making the glass candy. It took us two times to get it right. The first time we overcooked it and it naturally turned amber, so once the food coloring was added our “glass” was quite green. I also recommend using parchment paper instead of oil on the pan. The candy came out MUCH easier on the parchment paper than the greased pan alone.  The movie characters from this Disney Frozen Exclusive 6-Piece PVC Figure Play Set (right now about $32 on Amazon) for the top. Even with the figures on top of the cake (which are played with daily), the total for this cake was less than we would have spent purchasing a cake from the grocery store.

If you’re going for a Frozen themed party for a boy, check out the Olaf and Sven cake featured on 112 Birthday Cakes for Boys over at Spaceships & Laser Beams! It’s just darling! 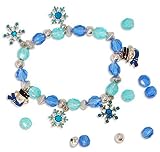 To thank our wonderful little guests for coming, we gave them a goody bag. I purchased just about everything from OrientalTradingCompany, except for this Snowman Charm Bracelet Craft Kit (1 dozen for $7.95).

In addition to the snowman bracelet, kids took a Frosted Snowflake Bag ($2/dozen) home with (Note, some of these items are no longer available): 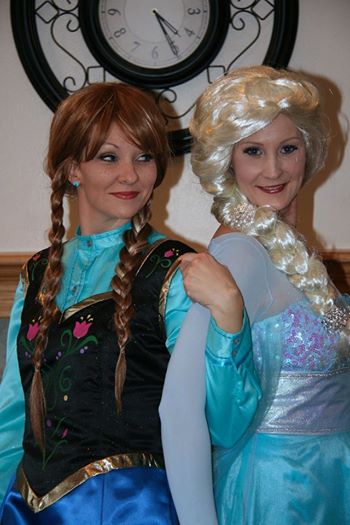 By FAR the thing that made our party the most special was our special guests, the Ice Queen and Ice Princess from Magical Celebrations. They truly made my little girl’s day incredible. She later told me that she nearly cried she was so happy. She was made an honorary princess of Arandelle and even received a sparkling tiara!

They are offering all Utah Sweet Savings readers a $10 discount plus a special phone call from a princess if you book before April 1 (you don’t need your party before then, you just need to fill out their form HERE to get started, and mention you heard about them on Utah Sweet Savings!). They have several other princesses to select from, and I highly recommend doing this to truly make your party unforgettable.

Watch the video below to get a preview of their amazing celebration (if you’re wanting to surprise your child with this, you might want to watch when they aren’t in the room).