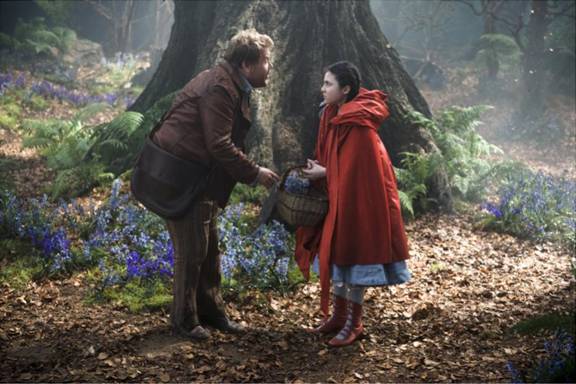 Have you heard that Disney’s “Into The Woods” is going to be in theaters on Christmas Day? I know that’s a LONG time away (less than 6 months, actually!), but this looks like it’s going to be amazing! I might be waking my kids up super early to open presents that morning so we can go see it in the theater that afternoon! In fact, I’ll tell my husband that’s what I’d like for Christmas…movie tickets to see “Into The Woods!”

“Into the Woods” is a modern twist on several of the beloved Brothers Grimm fairy tales, intertwining the plots of a few choice stories and exploring the consequences of the characters’ wishes and quests. This humorous and heartfelt musical follows the classic tales of Cinderella (Anna Kendrick), Little Red Riding Hood (Lilla Crawford), Jack and the Beanstalk (Daniel Huttlestone), and Rapunzel (MacKenzie Mauzy)—all tied together by an original story involving a baker and his wife (James Corden & Emily Blunt), their wish to begin a family and their interaction with the witch (Meryl Streep) who has put a curse on them.