While I haven’t logged nearly as many miles the last two weeks as I have been this summer, I raced two half marathons, which made the miles I did do grueling ones.

On Saturday, August 25th I ran the race I’ve been training for all year, the Top of Utah Half Marathon. I have only ran it once before, in 2009, when my goal was to cross the finish line in less than 2 hours. I crossed in 2:02. Ugh. That’s worse than being 10 minutes away from a goal! I was so close!

I was pregnant in 2010, so didn’t run it that year, and in 2011 I was just too out of shape. So this was the year I was going to redeem myself. I have been so confident in the weeks leading up to the race, that I changed my goal to finish in less than 1:57, then I changed it again to 1:55.

The morning didn’t start off well. Some friends were going to pick me up at 5 am, then we would go catch the buses that would take us to the start line. My alarm went off at 4 am, and I hit snooze.

The next thing I heard was my phone ringing at 5 am, my friends telling me they were in my driveway! Apparently it wasn’t snooze that I hit. Thank goodness they called me. I seriously would have slept right through the start of the race. I sent my friends to go catch the bus and told them I’d get on one of the later buses.

I got on my bus, and rode with a super tall guy that I later found out through conversation was married to

someone who grew up in my hometown! Small world, isn’t it? I had time for a pit stop at the start line, put my sweats in a clothing bag and threw it on a bus that would take my belongings back to the start line for me.

I found my 1:55 pacer, and after the start gun, lost her in the shuffle and got back towards the 2:00 pacer. I ran with a friend for a while, then got a break through the crowd to catch up to the 1:55 pacer and some other friends. I ran with them till the first aid station, where I actually had to stop for another potty break! I NEVER have to pee during races, but it was unavoidable. Less than a minute later, I was running again, and again caught one of my friends. I kept on cruising, and reached the 1:55 pacer a second time.

The rest of the race, I bounced back and forth in front of and behind that 1:55 pacer, till mile 11. After that aid station, the course goes slightly uphill. My legs were tired, and my calves started cramping, something they have never done before. I walked for a minute or so, then started running

again, and was able to sprint into the finish, with calves on fire, at 1:55:50! Considering the potty stop, I declare a GOAL ACHIEVED, and a new personal best for a half marathon by 7 minutes!  It felt great to push my body and mind to its limits to accomplish a goal! 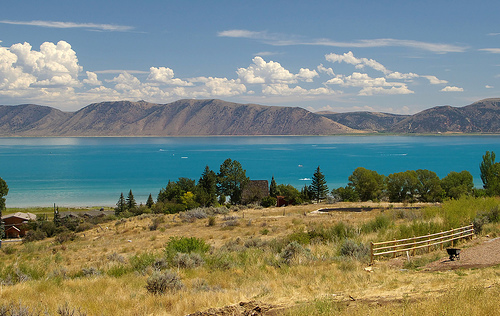 On September 1, I drove over the mountain to race the Bear Lake Monster Trail Half Marathon. Yep, another half marathon, with only one week after my previous half. I didn’t feel completely recovered, and seriously considered backing down to do the 10k instead. A few other friends were also there, who had also done the TOU 1/2, so I decided to stick with it, and just take it easy, like a nice Saturday  run.

The first 6 miles weren’t too bad. Although my headphones shorted out soon after the start of the race, which was totally annoying, I maintained a 10:30 pace, decent considering the 1100 foot increase in elevation of the out and back race.

At mile 7, I worried I was in trouble. My calves were starting to cramp. I started walking more and more. The steep decent didn’t help at all. At mile 10.5 I got a severe charlie horse that stopped me dead in my tracks. I tried to sit, but couldn’t, nor could I stand. I sat there, propped up in sort of a triceps pushup position for about 5 minutes in utter agony. I tried once to stand and actually cried out in pain. A few runners passed, making sure I was ok. I knew my friend was still behind me, and I wondered if I would have to tell her to send a 4-wheeler up to rescue me. I was able to relieve the cramps enough to start moving before she reached me, although she soon passed me as I couldn’t maintain a run for more than a minute. I finally made it to the aid station at about mile 11.5, where my friends were volunteering. One brought me a Powerade and water, while the other thoughtfully took the above photo.

Once I got back to the paved road, it wasn’t too bad, and I

finished with a slow jog. Yes, that’s the point. I finished. I overcame. My slowest time for a half marathon ever, 2:36, only a week after I’d achieved a new personal best. Was I frustrated? A bit. Disappointed? Maybe a little. But proud that I didn’t give up.

Join me on my quest as I figure out why I’ve only recently started having painful leg cramps! It could be an electrolyte imbalance, poor hydration, too much or not enough training, or multiple other factors. I need to get this figured out in the next two weeks, since I’ll be running the Cedar City Half Marathon on September 15!