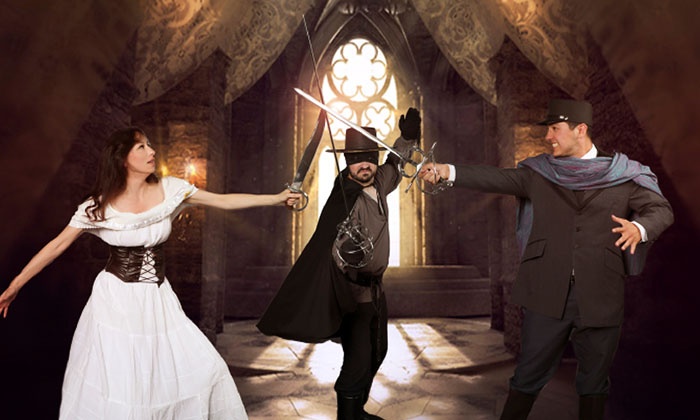 Have you gone to a Salty Dinner Theater production? These look like so much fun!

Audience members gobble supper as performers interact with them before and during the production. Regularly inhabiting The Old Spaghetti Factory, Joe Morley’s Smoked Beef & Bar-B-Q, and Mimi’s Café, among other locales, the show-accompanying meals range from scratch-made baked lasagna with ground beef and pork to a pound of succulent smoked-beef brisket.

Right now they’re performing Zorro! at a variety of locations through July 31, and we’ve found an awesome deal on tickets for you!

Choose from the following shows, all starting at 7:30 pm:

Expiration varies. Limit 8/person. Valid only for option purchased. Redeem on day of show for a ticket at the venue box office. Refundable only on day of purchase. Must redeem together to sit together. Merchant is issuer of tickets – discount reflects current ticket prices, which may change. ADA seating cannot be guaranteed; contact box office prior to purchase for availability. Ticket value includes all fees. Merchant is solely responsible to purchasers for the care and quality of the advertised goods and services.