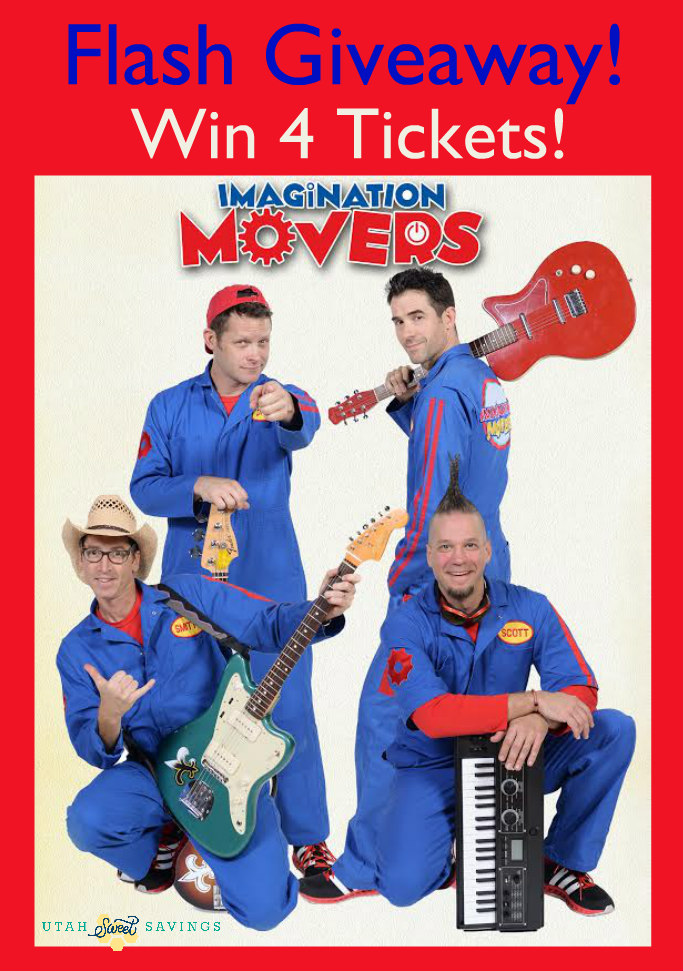 My kiddos LOVE Imagination Movers. I mean, they watched them ALL THE TIME!! Let’s be honest, I love them too! We all would enjoy this show!

I’m super excited to share the Imagination Movers are coming to Park City Utah this weekend and we are lucky enough to give away 4 tickets to one lucky winner. I’m totally bummed that we are going to be out of town and miss it. If you can make it I’m totally jealous!

Since this show is this weekend, this will be a FLASH GIVEAWAY! The giveaway will end Tuesday night. So make sure you enter right away.

The Imagination Movers story is the ultimate example of the power of imagination. In 2003, four New Orleans friends – Rich Collins, Scott Durbin, Dave Poche and Scott “Smitty” Smith – had an idea. They thought kids wanted and deserved music that spoke to them, not down to them. So, they started gathering after their kids’ bedtimes to write songs and brainstorm ideas about a children’s television show. Two years later, they had become the latest sensation of their musical city, attracting parents and children alike with an eclectic pop sensibility and lyrical turns about healthy snacks and playing catch and conquering childhood fears of bedtime. Lines to the Movers’ shows stretched for blocks.When the levees broke after Hurricane Katrina, the far-reaching disaster turned the Movers’ world upside down, but it didn’t put an end to their dream. Even while band members salvaged their belongings from flooded homes – and Smith reported to his day job as a fire fighter and first responder – they never stopped living according to the Movers’ motto: “Reach high, think big, work hard, have fun!”

This motto has served the band well. Not even the Imagination Movers themselves could have fully imagined their breakthrough success. The Movers partnered with Disney in 2007 and filmed 75 episodes of their Emmy Award-winning series over three seasons. The show aired in more than 55 countries and they’ve sold half a million CDs and DVDs to date.

Critical acclaim for the Movers includes nods from Entertainment Weekly and The New York Times, which reported the Movers are “prized by many parents for non-condescending lyrics and music that evokes the Beastie Boys or Red Hot Chili Peppers.” Parenting magazine praised the band’s “dash of rebellion” and songs that are “fresh and treacle-free.” National television appearances include The View, Live with Regis & Kelly, and Good Morning America. The Movers are currently developing an animated series “Super Movers” in partnership with Toronto-based 9 Story Media Group.

The Movers’ ninth release, “Licensed to Move” debuted in early 2015. The CD is bundled with a DVD that contains a live concert performance as well as music videos.

The Movers are known as a high-energy, interactive live music act. Over the last decade they have entertained more than a million fans in North America, Europe and Asia. Their “In a Big Warehouse” tour attracted 150,000 fans and was one of Pollstar magazine’s top 100 tours of 2011 (one of only two family acts on the list). According to thousands of fan reviews on Ticketmaster.com, Imagination Movers ranks as the No. 1 rated major touring act for families.

Over the past several the Movers have rocked packed houses in the U.S., Canada, Japan, Guam, Spain, Italy, Germany, the Netherlands and the United Arab Emirates. They are playing select North American cities in 2016.

The Imagination Movers are so awesome! They are offering Utah Sweet Savings an exclusive discount! Save 40% off adult tickets by using the code WALT at checkout! Sweet!!

One lucky winner will win 4 tickets to this concert! Just fill out the rafflecopter below to enter. Remember, you can get multiple enteries, so do as much as you can to have the best chance at winning.
Good luck and have fun at the concert!