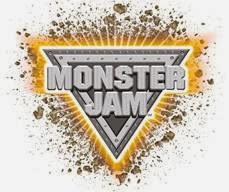 This year we’ve decided to head on over to Monster Jam!  We’ve thought about it other years but I wasn’t sure my kids would be into it yet.  But this year we are going to try it.  Are you familiar with Monster Jam?

WHAT is Monster Jam??:    Motor sports fans will witness EIGHT of the world’s best monster trucks battle it out in the ultimate event of intense speed, racing and destruction as Monster Jam returns to Salt Lake City – and due to popular demand, a fourth event has been added on Sunday to the schedule now. The 2014 truck line-up is highlighted by the Salt Lake City debut driving appearance of Grave Digger legend and four time World Finals Champion Dennis Anderson plus first time truck appearances for Scooby-Doo and Lucas Oil Crusader.  Additional fan-favorite trucks include Captain’s Curse, Time Fly’s, Bounty Hunter, Iron Outlaw along with Utah’s own Maverick (driven by Ron Duncombe) that will be electrifying crowds at the EnergySolutions Arena with the breathtaking stunts and awesome power of the world’s most popular monster trucks.

In addition to the world-class racing and freestyle competition action, die-hard fans can come to the stadium early on Saturday to enjoy the “Party in the Pits” pre-show experience – which gives fans unparalleled access to view their favorite trucks up-close, meet the star drivers for autographs and take photos!

One of the most popular touring family entertainment sporting events in the world, Monster Jam is a high-flying, car-crushing explosive event of demolition, speed and powerful stunts surrounding the world’s best monster trucks and drivers whose skills provide an awesome spectacle of “rock-and-roar” that will bring fans to their feet cheering for more!

TICKETS: Ticket prices are $22 and $30 for Adults; Kids tickets only $5 each for select seating.

**Above ticket prices are advance purchase only; all tickets priced $2 more day of show.  Tickets subject to convenience, service and handling fees.

Tickets are available for purchase at the EnergySolutions Arena Box Office, participating Smith’s grocery stores, online at www.smithstix.com, or charge by phone at 800-888-TIXX.

SPECIAL OFFERS:   Maverik Adventures First Stop is offering a $5 discount coupon at participating Maverik locations with the purchase of 8 gallons of gas.