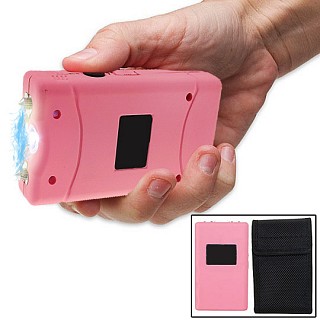 When I run alone, I often carry pepper spray in case I encounter a mean dog (or worse). I’ve never had to use it, but I’ve heard from fellow runners that pepper spray gets EVERYWHERE, including on yourself. They recommend carrying a stun gun instead. Here’s a great option. I would love it if women had one of these in their purse, too.  You just never know when you’ll be in a situation where it could save your life.

3 Million Volt Pink Ladies Stun Gun – $7.97 WITH CODE
Make sure to use code STUNNING20 during checkout

When an attacker is touched by the stun gun it will disrupt the message the brain sends to the voluntary muscles. Simply touching an attacker will deliver a high voltage shock causing loss of balance and muscle control, confusion, and disorientation bringing him to his knees and making him incapable of further aggressive activity.

The built in Wall charger recharges the internal rechargeable battery so you’re always ready for action. Included is a nylon pouch w/ belt loop. This unit delivers a 3 million volt (3000k) shock to the attacker. Also included is an LED light with a separate on/off button.