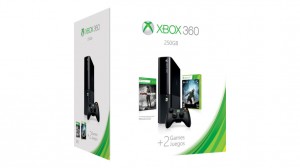 Microsoft has its Xbox 360 250 GB Holiday Value Bundle available for $199 (regularly $299) today! This doesn’t come with the Kinect, but has a port so it is ready to go if you choose to add it at a later time.

If you’re looking for a console with the Kinect, you can get this  Xbox 360 4 GB Kinect Holiday Value Bundle, also $199 (regularly $299). This bundle includes: