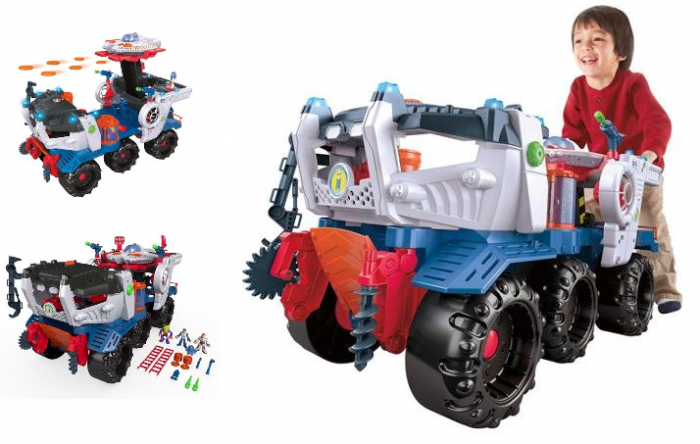 WOW! This is an awesome price on this BIG toy from Kmart!

With its awe-inspiring size, kid-activated control panel, and projectile-firing space shuttle, the Supernova Battle Rover is the perfect vehicle for engaging aliens, humans and young imaginations in inter-galactic battles that will last for hours or even days! It’s equipped with a light-up chamber that scans and detects aliens, a pull-out drill and saw blade for attacking, a crane to capture aliens, a small vehicle with space troopers to scour the area, two projectile launchers, and a huge storage area for humans and captured aliens.  Its 19 lights and more than 200 unique phrases and realistic sound effects, including engine sounds, scanners, alarms, guns, and much more, add to the space-age pretend play.  When other Imaginext® spaceships (sold separately) fire at the Rover, it responds with special sounds and phrases! The Supernova Battle Rover also serves as the launching pad for a removable space shuttle that has its own projectile launchers, lights, phrases and SFX – and can interact with the Rover!

Shipping is FREE, or you can select free in-store pickup!